I researched the Fuji Five Lakes area before I visited (of course), and one thing I kept seeing was something called “Houtou.” From the pictures, it looked like a noodle soup of some kind and is famous in Yamanashi Prefecture. From the reviews, it looked like the place to go was Hoto Fudo. So I went. Or, well, tried.

After walking for close to an hour, in the *cold* and windy evening, I arrived at Hoto Fudo. There were no signs outside saying if it was open or closed, so I walked in, hoping to ask someone. There were people sitting inside. “Yay!” I thought. “That means they’re open, and I didn’t waste all this time walking here!” NOPE. There was a lady busy doing things behind the counter, and I got the impression she was ignoring me. I walked up closer and she finally looked at me, made an X with her hands, and said, “Closed.” It was 5 PM on a Friday.

Thoroughly frustrated and annoyed, I began the trek back to the train station when I passed a restaurant that looked rather busy and a little fancy. I couldn’t read what the place was called, but the banners proclaimed that it was a houtou restaurant. I swept aside my shattered nerves, took a deep breath, and marched across the street.

The restaurant was traditional-looking, both inside and out, but wasn’t particularly fancy. There were plenty of people inside wearing casual clothes, and they were obviously open. They also had a menu with pictures to look at while you waited! Some of it was in English! I quickly made a mental note to get the pumpkin houtou, even though a part of me was considering getting the much more expensive bear or soft-shell turtle houtou.

Top option is duck, middle is turtle, bottom is bear!

It took a while for the soup to arrive, but when it did I was shocked. I had figured that the portion size would be big, but I didn’t expect it to be THIS big! It was served in a large, iron pot that the server carried by sticking a wooden hook under the handle and lifting.

The soup was hot, flavorful, and not too salty, with chunks of pumpkin, taro, and potato, slices of onions and carrots, a scattering of pea pods, and HUGE noodles. The noodles were looonnnngggg and flat, with a consistency close to udon. 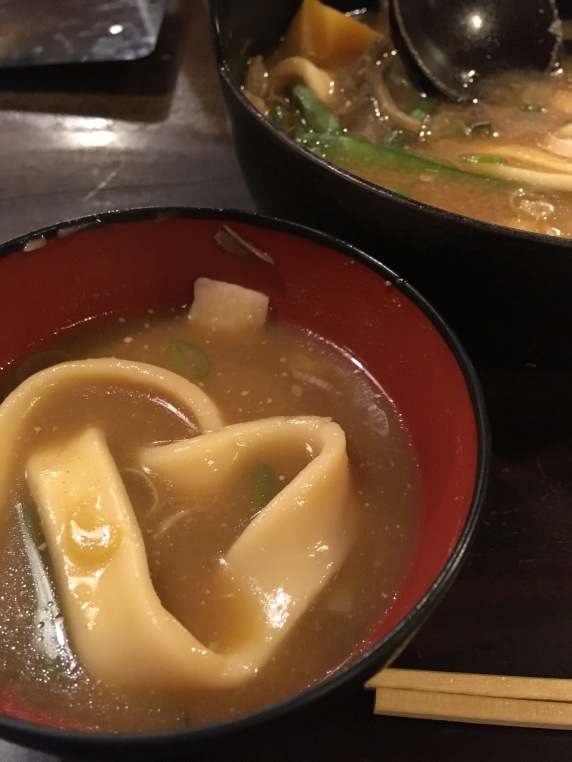 Definitely recommend if you’re in Yamanashi!