Those who can’t ski/snowboard…

I will start this post off by saying that I have a love/hate relationship with the Nagano winter. Being from South Carolina, where the average snowfall is maybe a centimeter that falls on one day out of the year and throws the state into chaos, Nagano is a completely different experience for me. It is COLD, there is SO much snow, and my house does NOT have central heating. More often than not I find myself in a rut of doing absolutely nothing and blaming winter for my problems. And, well, some of them are winter’s fault. I’ve had to change all of my habits to adapt to living in a house in which “room temperature” is only a few degrees above whatever it is outside — heaters in the rooms I occupy often, turning them all on in the morning, turning the hot water on in the shower minutes before I’m ready so I can run in when I’m ready (and to thaw the ice that forms on the floor in the shower room). Plus, I get woken up in the middle of the morning to the snow plow literally shaking my whole house, and then I have to get up early and shovel the snow. So, in my head, everything uses so much effort that I don’t want to do anything except sit in front of a heater and watch Netflix… which is a problem.

But for all the problems it brings, Nagano winter is also incredibly gorgeous.

It transforms the whole prefecture into a beautiful snowy landscape where everything familiar is suddenly brand new again. I remember waking up to see Mt. Kurohime covered in snow for the first time and being amazed at how fun it is to walk through powder snow. I wanted to lie in it, play in it, make snow angels, build snowmen and make the biggest igloo ever!! Cold weather means hot chocolate and super cozy beds and kotatsu, and cool snow boots! Snow also means winter sports — skiing, snowboarding, ice skating, snowshoeing, and more!

Unfortunately, it was on my third time skiing that I dislocated my shoulder — and ended my ski season. I started to slip back into the rut.

After three weeks of missing skiing, I went snowshoeing with my co-worker and some other ALTs. I’ve been snowshoeing once before, with Hunter when we stayed at a ryokan in early January. It had been fun. Tiring, but we got to see some great views. This time, we started at the beginning of the trail that leads up to the shrine on Togakushi (the trail that is eventually lined with the giant trees). However, our guide soon left the trail and began trekking through the powder snow. He led us to a cross-country ski path which we followed all the way to Kagami Lake — one of the most beautiful spots in this area. On a clear, windless day, the Togakushi mountain ridge (which is right behind the lake) is reflected perfectly on its surface. Fun fact — kagami means ‘mirror’ in English, so I’d say it’s a fitting name!

It was breathtaking. Kagami Lake in summer looked like something out of a dream; Kagami Lake in winter was like seeing that same dream, but with a new element of wonder and excitement to it. Turns out the lake had frozen over and we were able to walk on the surface!!! I’ve never walked on the top of a lake before, and in a couple places we found holes where people had been ice fishing! While everyone ran around (as best they could with snowshoes on), I stood still for a few minutes, enjoying the beauty of it all. 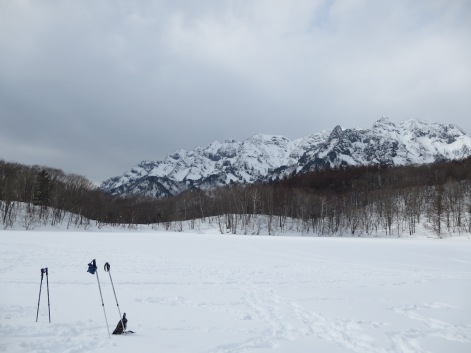 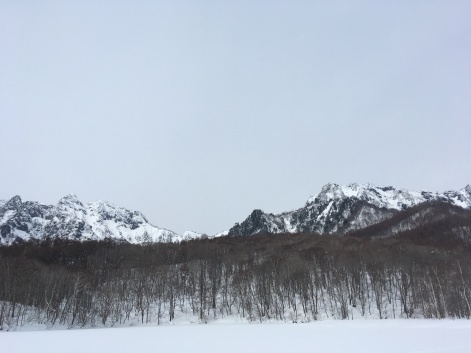 Soon, our guide called us over and we had lunch. He had dug out a big snow table so we could all sit around and enjoy soup and a hot drink before trekking back to the car.

And so, while it certainly isn’t skiing, I’m thinking about buying a pair of snowshoes, or at least finding some to rent. I have a plan to hike Mt. Izuna in snowshoes, but I have to think a little more about that haha. Much different dangers hiking up a mountain in winter than in summer! At least now, I am less tempted to sit around because “There’s nothing to do;” if anything, there are more things to do! I have to explore all the places I’ve already been to and see how different they look when covered in at least 3 feet of snow!!