The first thing my fiancé Hunter said to me when I told him my JET placement was, “YOU’RE NEXT TO THE SNOW MONKEYS!!!” So of course, we had to go. Now I’ll admit, I was a little nervous about this particular adventure; the last time I had seen monkeys one of them bit the friend I was traveling with. But it turns out I had nothing to worry about. The monkey park is a wonderfully fun place to visit! 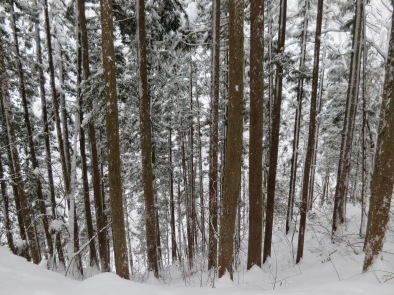 Located in Yamanouchi, the Jigokudani Monkey Park is about 40 minutes from my house. We managed to get the last parking space in one of the closer parking lots before starting our 1.6km walk to the park itself. The start to the trail is a steep, icy staircase that is only big enough for people to go one way on. This meant that the people going down had to kind of slide down the concrete slabs on either side and hold onto the railings for dear life! This staircase, and right before you get to the park, are the only steep parts. Most of the path is perfectly level, so it’s good for all ages and fitness levels! Also at the start is a small gift shop and building where you can rent spikes for your shoes so you don’t have to worry about slipping and falling on the path.

The path was gorgeous. Everything was covered in snow, creating that level of quiet that only snow can make. Of course, it was sometimes hard to appreciate that silence because of loud tourists, but what can you do. It IS a tourist destination. All along the path were signs telling visitors what NOT to do when they get in the park. All the information was in Japanese, Chinese, Korean, and English, and said things like don’t get too close to the monkeys, don’t touch the monkeys, and don’t bring plastic bags into the park. Apparently, the monkeys have figured out that most plastic bags have food in them, so they’ll get super aggressive and take them from you…

Eventually we came to a small group of buildings in a clearing. One of them was a ryokan, advertising that they had a hot spring for humans; however, upon closer inspection, it turns out that that hot spring was outside… and filled with monkeys haha. It was close to here that we saw our first monkey! People immediately started grabbing their phones and pointing at it so other people could see. The monkey didn’t care. It only had one thing it its sights: a plastic bag being carried by a Japanese woman. He walked right up to her, reached up, fought with her over the bag for a second until it slipped off her arm, then opened his mouth aggressively before dumping the bag upside down right in front of her. He picked up the plastic water bottle and examined it before tossing it aside and focusing on an onigiri instead. He proceeded to unwrap it skillfully and ran away to eat his prize. That’s him in the pictures below.

Here’s him eating the onigiri haha

The view when you enter the park

From here, we had another set of stairs to climb before an inclined slope to the park entrance. The entrance contains a gift shop and a bathroom, so don’t worry about having to hold it the whole time you’re sightseeing. It wasn’t long after we entered the park that we saw more monkeys. There was a pair of them sitting beneath some bushes close to the path, and they were surrounded by people taking pictures. A little further, there was a nice overlook where you could see lots of monkeys running around below! As we were walking past the overlook, we suddenly heard a couple people gasp in surprise behind us. Just as I turned to see what had happened, a monkey walked past me, not a care in the world haha. 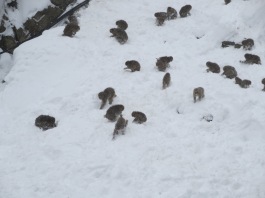 Eventually we came to a bridge, and from it we could see the hot springs! Monkeys were crowded around it and on the snow. We had unintentionally arrived around lunch time, and a worker was feeding them. It got a little tense a few times as monkeys fought with each other over the small pellets. At one point, a group of monkeys was spread out over the snow when one monkey gave a shout. Immediately, all the monkeys turned in the direction of the sound before moving back. A much bigger monkey had entered the scene, and it was obvious he was an alpha.

It was lots of fun to watch the monkeys. They treated the tourists like they didn’t exist, darting between them and climbing on the fences feet, sometimes inches, from people. We even saw a couple of mother monkeys and their babies! Unfortunately, not many monkeys entered the hot springs when we were there. Maybe one or two went for a dip, but that was all. We eventually went down an icy bridge that lead to a path next to the river and were treated to closer encounters with the monkeys. Right when we were about to leave, Hunter gasped and told me not to move. Sitting right next to me was a small monkey! He was awfully cute, and Hunter got a couple of pictures of him. I’m not in any of them because I was definitely not about to crouch down and get any closer to him haha. 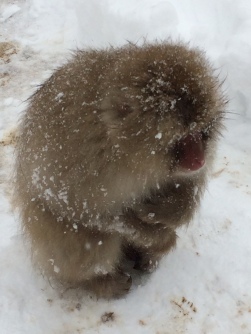 The adorable monkey who decided to sit next to me!

All in all, the monkey park is a fun thing to do if you’re in the area. And while I can’t speak to the crowds in other seasons, I would guess that winter is the most popular time to go so be prepared for children scared of monkeys screaming when one gets too close and waiting in the mob of people to get a decent picture of the hot springs. Admission is 800 yen for adults, 400 for children, and there are plenty of ways to get there from Nagano Station if you don’t have a car. I’m looking forward to going again, maybe in spring or summer when everything is nice and green instead of covered in snow!

Momma monkey and her baby 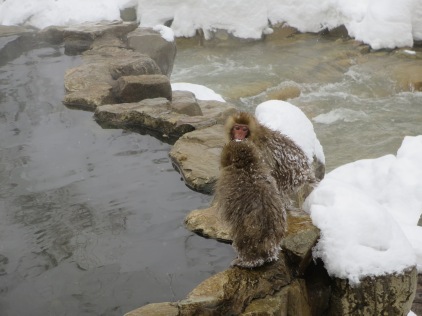 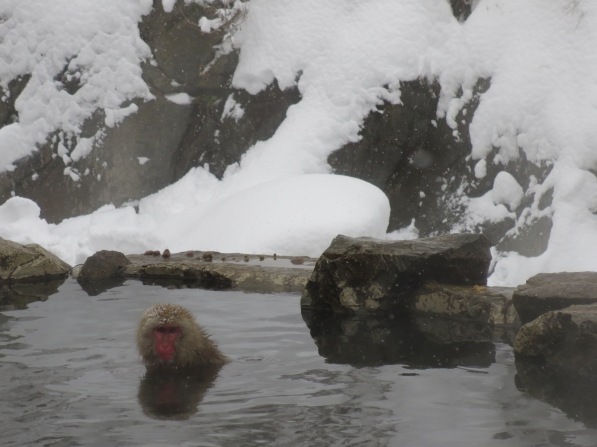 Hunter with his favorite monkey. This little guy is sitting on a small source of hot spring water! 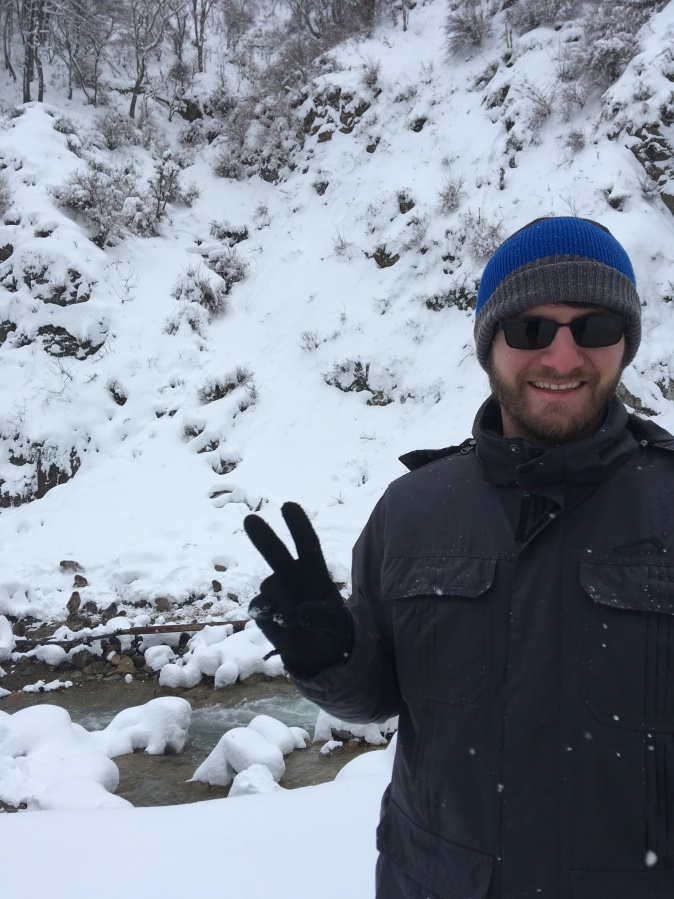 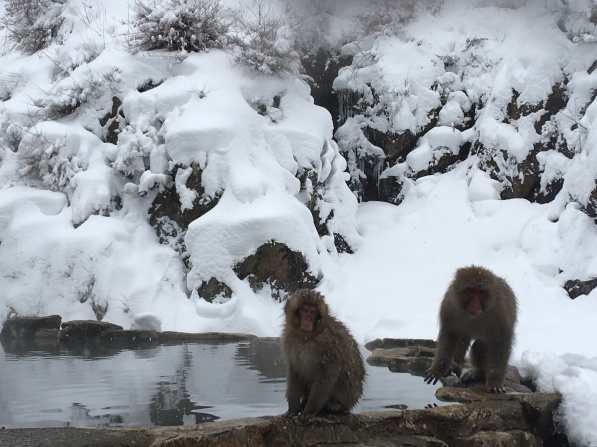 Is that… a snow monkey behind me?!