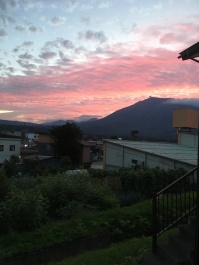 Well, that’s all of the highlights for the first week. It hasn’t all been cupcakes and cute students though; students have mocked me in class, I didn’t know what I was doing for most of the first week (still not convinced I know now, AFTER the first week), and it is very difficult being completely surrounded by Japanese. Especially with the little kids, I often can’t understand them or don’t know enough Japanese to answer their questions. The older kids act like I’m fluent in Japanese and seem annoyed when I can’t talk to them in Japanese. On top of all of this, I was in the area warned about the North Korean missile that was fired on Tuesday, which scared me out of my mind for a good hour or so even though everyone at school acted like nothing had happened.

But I CAN do my best to keep a positive outlook, I CAN be patient with myself, I CAN be flexible and understanding, and I CAN treat every day as a learning experience.