Life is as busy as ever, but I find I’m getting more and more used to living in Japan. I’ve already been here for two whole months; I don’t really notice people’s stares too much anymore, octopus is actually kind of tasty, I like to think I’ve made some Japanese friends, and strange and surprising things now happen maybe two or three times a week instead of on a daily basis. However, those strange and surprising things are always accompanied by a fun story, so I’d like to share some of them with you 🙂

A few weekends ago, I was able to meet up with my older sister and go to Universal Studios Japan (USJ)!! I hadn’t seen her in a few years, so I was really glad we were able to make it work. While we were there, we went to the Attack on Titan themed area of the park (an anime that is popular both in Japan and abroad), as well as ‘The Wizarding World of Harry Potter.’ …… Yes, that means that the first time I ever went to Universal Studios was in Japan, and yes, they dubbed everyone’s voice into Japanese on the amazing and definitely-worth-riding-twenty-more-times ‘Harry Potter and the Forbidden Journey’ ride which was super weird. But I guess the fact their voices were dubbed doesn’t really matter much when you’re more concerned with the dragon that’s in front of your face about to breathe fire, or the spiders spitting on you, or the dementors flying too close for comfort. Besides that awesome ride, one of the highlights was finding and buying the first Harry Potter book in Japanese! It was my first “long chapter book” when I was little, so I figured “why not make it my first ‘long chapter book’ in Japanese too?” The reading is definitely slow going, but I find I can pick up most of what’s going on. It does help that I’ve read it in English, but I like to think it’s because my Japanese skills are improving 😉 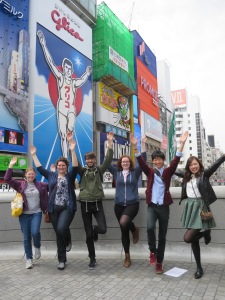 It’s the Glico Man sign!! From left to right: Me, Katharina, Pierre, Candice, Rintaro, and Saori

Flash forward to last week, three friends and I were sitting in the lounge of the Center for International Education (a.k.a. CIE; it’s where all the international students’ classes are, as well as our mailboxes, and everyone chills there between classes) talking, when two Japanese students came over and gestured towards the empty chairs at our table. As it usually happens that they want to take the chairs to use at another table, I said, “go ahead;” except instead of taking them they sat down at our table. A few minutes of awkward silence ensued before they started asking us questions in English. We chatted for a while before they asked “do you speak any other languages?” We all answered English, some Japanese, and a few said a little bit of French. They seemed disappointed; we then found out they were Spanish majors! They were looking for someone to practice with because they had a big test coming up. Eventually, we asked a nearby friend if he knew anyone who spoke Spanish, and five minutes later another international student had joined us and began happily speaking Spanish to the two Japanese students. Then a few others at the table started flexing their French muscles, a discussion of Latin commenced, and the rest were practicing their Japanese for the upcoming oral exams. It was a very strange sensation, being surrounded by languages. I guess that’s how it is every time I step into the CIE, I’d just never noticed it until then. It made me feel like an actual international student

Last but not least, l went to Nanba (a part of downtown Osaka) with a few friends last weekend to look around and explore. Not ten minutes after we got off the subway and started walking, we were approached by two soon-to-be-freshman Japanese students who said they wanted to practice their English and were willing to show us around Nanba! It was a little awkward at first, as all first meetings usually are. After ten minutes though, we were chatting like old friends. Saori and Rintaro took us to the Glico man statue, where we got a group picture taken, before walking around Shinsaibashi, visiting a temple with a statue completely covered in moss, exploring a fish market with all kinds of new sights and smells, and eating at a delicious tonkatsu restaurant! We probably wouldn’t have found half of those things had it not been for Saori and Rintaro, so we made sure to thank them lots when we finally split off. Good luck in college you two!
(You can see the pictures for both USJ and Namba under ‘Osaka’ in the pictures tab)

All of these experiences are what one of my teachers at Kansai Gaidai would call “weird globalization.” I never imagined that I would go to an American theme park in Japan where the section based on a British book series would be the most popular and then buy that British book in Japanese. You have to admit that’s weird! I also never imagined I’d meet Japanese students who were Spanish majors, or be approached by some Japanese students who wish to practice English. It’s definitely strange; but it’s also one of my favorite things about being here in Japan. You are always kept on your toes and in anticipation of the next amazing experience to come your way, whether you actively seek it or not.

In other news, I’m going to Tokyo today for spring break! My friends and I plan to do lots of sightseeing, and Tokyo Disney might be on the list. I’ll make sure to post pictures as soon as I’m able!