A Brief Overview of my Current Lifestyle

I’ve had a lot of new adventures since I last wrote so I’ll try and catch you up now.

Here is part of my room! To the right is my desk and to the left is the closet where I hang my clothes and store my futon. Balphonzo really likes his dresser spot.

I moved in with my host mother (okaasan) last Sunday afternoon. She came to pick me up with one of her adult sons and three of her grandchildren, so it was quite the welcoming committee! We chatted a little in Japanese in the car on the way to her apartment building, both of us trying to get to know the other better. She also pointed out things along the way, landmarks, so that I would know when to get off the bus and how to find the building she lives in. That night, okaasan made Korean food for dinner which was really good, and I had kimchi for the first time. I went to bed later on in a complete daze; there was so much to remember:

However, since that first day I’ve really enjoyed living with okaasan. One of my favorite things is when she says a sentence with a word I don’t know, she makes me write it down so I can study it later. She is also really good about correcting my mistakes and pointing out more natural ways of saying things. Other than that, she answers any questions I have, whether it’s about what someone just said on TV or what kind of food is in front of me, makes amazing food for dinner and notices what I don’t eat or don’t like and then won’t make it again, does my laundry for me, and finishes preparing a big breakfast for me before I’m even in the kitchen!

As concerns school, my classes are really interesting so far (1 1/2 weeks in). I’m taking a total of 14 credit hours, or four classes, this semester: Spoken Japanese, Reading and Writing Japanese, Japan and Globalization, and Intro to Japanese History. My Japanese classes are pretty difficult. I was placed in level 4 which I wasn’t expecting; they finish the Genki textbook in level 3, but I still had three chapters to go! This led to me cramming three chapters worth of vocab, kanji, and grammar for a review test at the end of the first week, as well as another review test for my Reading and Writing class; luckily, I was able to pass both so I will remain in level 4 for the rest of the semester! Other than me playing catch-up, the classes are great; the teachers are very nice and helpful and the classes are fascinating. When I’m done with classes (which varies on the day; anywhere from noon to after six), I have to commute by bus back home.

The commute is around 40 minutes split between two buses, and the total fare is 460 Yen (around $4) one way. Multiply it by two and I figured I’d be spending almost 1000 Yen per day on transportation alone! I did NOT budget that kind of money, and since it would take over an hour to get there on foot, I bought a three month bus pass for around 25000 Yen within the first two days. The commute isn’t too bad; it’s a little difficult because everyone uses public transportation since it’s available, clean, and cheap, so it gets really cramped in the mornings and at night. Sometimes, you don’t actually need to hold on to anything because there are so many people crammed in around you! 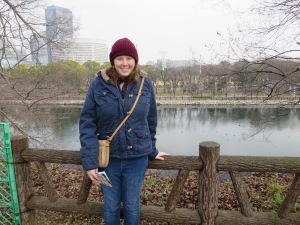 This is near Osaka Castle; go to ‘Osaka’ under the ‘Pictures’ tab to see more from this trip, including the Shitennoji Temple!

In other news, I now know how to ride the train. I have never ridden a train before, and while it may be simple, everything is more complicated when you’re in a country that does not speak English. I’ve ridden it twice now: once with a group of people to get to Kyoto and back last week (pictures are already up), and again with a friend to get to Osaka Castle, the Shitennoji Temple, and back. Buying a ticket is easy; it’s figuring out where to go after that that’s a little more difficult. It was easy the first time because we were with Japanese students who have probably ridden the train a hundred times. Yesterday, however, Katharina and I walked around in circles for a while before finally asking someone in Japanese. We were rewarded with an answer in English: “Track number four.” As soon as we walked through the ticket gates, there were plenty of signs in Japanese (and English…..) that told us exactly where we needed to go. After that it was pretty simple; until we were on our way home. We decided to take a different train back, and at one stop, everyone got off. We were like, “that’s weird,” and kept sitting there until a passenger was nice enough to tell us that this was the last stop for this train and we needed to get on another one….. Fun times!