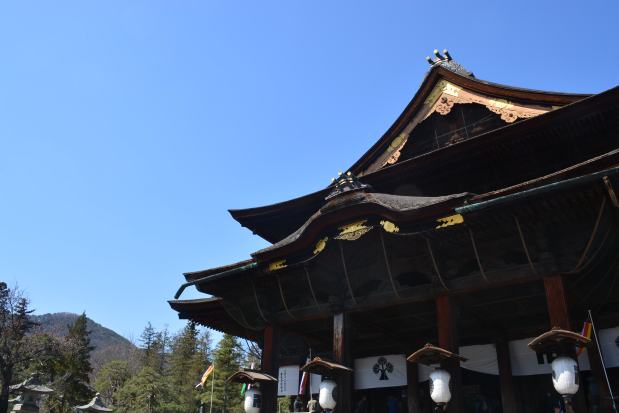 Sorry I skipped a couple; I’ll get back to them. Wanted to post this one first because it has a not-so-great story that goes with it, and it’s been on my mind. Goshuin number 47 is from Zenko-ji in Nagano City.

I hadn’t visited the temple in a while, so I decided I’d go and maybe hit some other temples along the way.

Got a regular goshuin and a special one for spring (yay spring!!)

And that’s where things went downhill. I must admit, it seems like every time I go to Zenko-ji I have a bad experience. Probably why I hadn’t been in a while. There’s always some old guy who wants to practice his English with you, or a camera crew waiting for foreigners to come so they can interview them on how amazing Japan is. Sorry, no, I don’t want to talk to you. I came here to get a stamp, take pictures, and have some me-time. This time was worse than usual.

It happened right after I got my stamps. I was juggling my stamp book, wallet, and camera, so I walked over to a bench to sort my stuff out. On my way, I passed a guy with a pug. I smiled at the pug and kept walking. As I set my stuff down on the bench and was bent over sorting through it, I realized that I could hear the pug behind me and he wasn’t moving. I turned around and his owner had his phone out and was obviously taking a picture of me. 「きれい～」 “Beautiful,” he said in Japanese. Thoroughly disgusted, I finished packing up and walked stiffly away into the temple. As soon as I was there, I started thinking about all the things I should’ve done — taken a picture of him, yelled at him in English/Japanese, calmly asked him to not take my picture — but in that moment all I wanted to do was to get out of that situation. Felt gross. I’ve got another post that’ll be up tomorrow about possible ways to get out of a situation like that, as it happened again a week later to my friends and I at a hanami party. Anyway, here are the stamps.