My mouth is watering already…..

Okonomiyaki is probably my favorite Japanese dish, and I’m not sure why. Maybe it’s the mix of ingredients, the way you make it, or the mayo and BBQ-type sauce on top… Maybe it’s all of the above!

Okonomiyaki is often called  “Japanese pizza” — I prefer “savory pancake.”  What’s in it depends on where you go, and often who makes it. I had okonomiyaki in Osaka that was completely different from the kind in Hiroshima (they put noodles in okonomiyaki in Hiroshima. DELICIOUS!), and I just made okonomiyaki the other night and made it another way! This is because the word ‘okonomiyaki’ essentially means “as you like it.” There aren’t really set rules, you just make it your way!

The basic ingredients are flour, eggs, cabbage, and pork belly with Japanese mayo, scallions, okonomiyaki sauce (tastes kind of like BBQ sauce), bonito fish flakes, and seaweed flakes as the toppings. The ones I made the other night had dashi stock in them, pickled ginger, and tempura scraps in them as well, but I left off the fish and seaweed flakes. I’m going to make them again sometime and see what else I can put in them and how else I can tweak the recipe!

How you cook it can vary too. You usually use an electric skillet or something similar, but I made mine in a frying pan and it turned out ok. Some people put the meat down first and then pour the mixed up ingredients on top, others pour the ingredients down first then put the meat on top — or, if you’re in Hiroshima, you build the okonomiyaki in layers: meat, ingredients, then cook the noodles separately and add them on top and flip it a couple of times or however. It all depends on you!

Unfortunately, I don’t have a picture of the okonomiyaki I had in Hiroshima. I guess that means I’ll have to go back and eat it again! I DO have pictures of the okonomiyaki I made at home a few nights ago (far left) and the one I ate in Tokyo during JET orientation though (second to left)! I know, I know, it doesn’t look appetizing, but it is. Trust me.

Updated 12/6/17 with two more appetizing pictures of okonomiyaki. The far right is from a restaurant in Iiyama that had fantastic okonomiyaki and takoyaki, and the second from the right is from a food court in the basement of a skyscraper in Nagano City. It came with french fries! 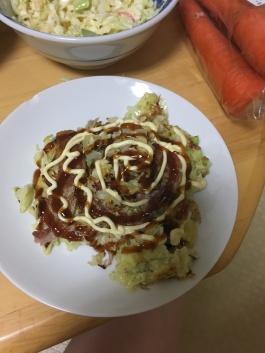 This is the okonomiyaki I made a couple nights ago….. It fell apart on its way to the plate!

Okonomiyaki at Tokyo orientation — mine is on the right 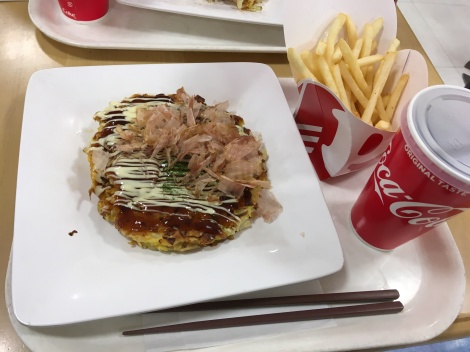 Is that… okonomiyaki and french fries?! Yes, it is! Only in Japan 🙂

THE BEST OKONOMIYAKI EVER! This is from a restaurant in Iiyama. Will definitely be returning.