One of the fourth grade teachers came to me the other day and said, “Some other teachers and I are going to go to the Myoko Illumination on Friday; would you like to go?” I had no idea what it was, but it sounded cool (plus I was just happy to be invited) so I happily said yes! I asked the other ALT at my school what it was, and he couldn’t really tell me. All I could figure out is that there are lots of lights; I imagined it to be kind of like a Christmas light display, but on a MUCH larger scale.

The illumination was about 30 minutes from Shinano by car, so it surprised me when a lot of the teachers (most of whom have been here for at least two years) had either never heard of it, or never been. When we arrived at the APA Hotel and Resort Myoko, we could already see blue lights and hear music coming from the ski slope. At the bottom of the slope were food trucks selling things like okonomiyaki, soba, ramen, french fries, and ice cream. Everyone got food and we all sat and ate together; some of us (including me) ended up getting ice cream even though it was quite chilly that night.

The illumination was absolutely incredible; they had taken small LED lights (like Christmas lights) and covered the entire ski slope and surrounding walking trails with them. The beginning was a tunnel of these lights, separated by color and various fake plants to represent the seasons. First was fall, then summer, spring, and winter. All of them, but especially winter, were beautiful. What separated winter from the rest was icicle lights hanging from the top of the tunnel as well as streaks of lights changing from blue to white; they looked like shooting stars.

After that the tunnel opened up into a wide forest area with lights all over the grass making a distinct path. These led to a dragon that was surrounded by color changing lights, with fake roses at its feet. A little further through the illuminated trees we came upon a gorgeous pond area with a bridge covered in lights; the banks were also covered, as well as a tall tree on an is and in the pond, a path behind the pond, and various trees around it. We were not allowed to walk around the pond. Suddenly, we noticed that people were sitting down nearby, and there was a countdown clock; not knowing what to expect, we sat down and waited for the clock to stop (it only had about two minutes left). What followed was the most amazing light show I’ve ever seen in my life. 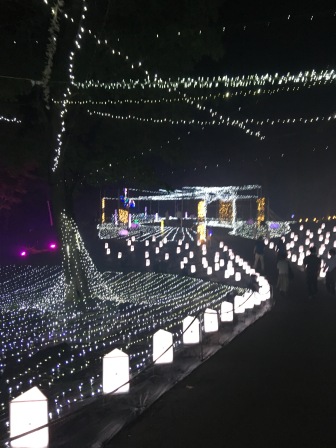 A female voice told everyone a quick story, I believe about how in the warring-states era there was a dragon that fought with the gods and called Niigata (where Myoko is) its home. I was honestly too distracted by the lights to concentrate on the Japanese haha. All during this the lights were flashing on and off (at one point all of them turned off), until finally the narrator finished, and the music began to pick up. Among all the lights changing and flickering and blinking, a huge fan of water sprayed up from the pond and light were shown through it, making the water look different colors. Just when you began to think it couldn’t get any cooler, most of the lights turned off and the water was still being sprayed. Suddenly, images appeared ON the water! They were using the water as a screen and projecting things onto it! It was absolutely amazing. The narrator came back and said more to the story, and it was shown on the water screen. Later, they used lasers to make images of clouds in the sky and do dizzying patterns above us. I could not believe how amazing it was, and when it finally ended, I sat rooted to my seat for a few seconds, not believing it could be over. Once my group and I went to leave, we noticed that the countdown clock had restarted – there were six minutes before the next show; I guess we weren’t as lucky as we thought, coming upon this area with two minutes left to go haha. 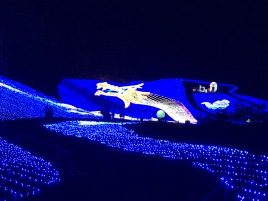 After that we walked through more forests with illuminated trees before coming to the top of a ski slope that was covered in blue lights, with a dragon winding its way down the mountain (It actually holds the Guinness World Record for “largest image made with LED light”). It was gorgeous, and the lights around the dragon (and on the dragon) changed constantly, so while one moment the dragon was lit up, the next only his eye and parts of his mouth were. The light show made use not only of the light, but also of the dark as well which made for some moments of nice contrast when the dragon was a black shape dominating the slope instead of the bright, colorful one you could see at other times. At the very bottom of the slope was a couple of people taking group pictures of people behind a sign that said Myoko Happiness Illumination, and in front of the light dragon. Before we grouped together, though, we rang a bell one at a time that actually controlled how the dragon was lit up; ring it once, the colors would shimmer. Ring it again, shooting stars would fall around him. Ring it three times, the dragon would go dark. 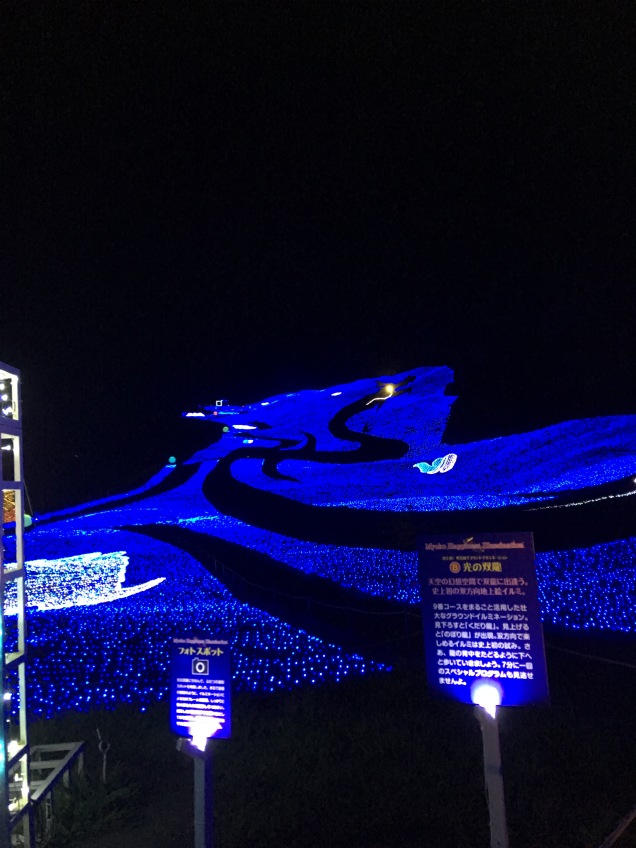 All in all, I highly recommend going to this if you’re able to. The illumination will be happening until sometime in November, so there is still plenty of time. There was also plenty of parking for it, so don:t worry about not finding a parking space if you drive to it. I would be aware of crowds though; when we went crowds were sparse because of a looming threat for rain. However, I’ve been told that other days you can’t find a seat by the food and the flow of people it constant. That being said I will definitely be coming back to this. The price was 1500 yen for an adult, and while that is kinda pricey, I have some friends that want to go. I also wouldn’t mind taking another stab at the narration during the water screen 🙂